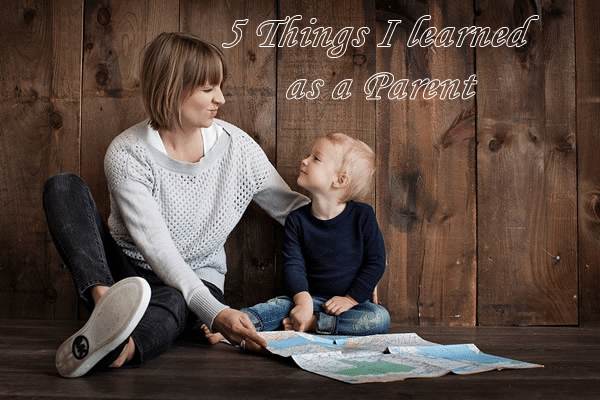 Shannon Serpette
Add Comment
Five Things I’ve Learned as a Parent include How to Prioritize and Not Take Myself So Seriously, The Worry Can Be Overwhelming ... read more

When I first learned I was pregnant, I was so excited and I couldn’t wait for my child to be born. I wanted to show him the world and teach him everything he needed to know. Little did I know I would learn as much as he did.

Here’s what I’ve figured out during this crazy ride called parenthood.

1. Money Will Work Itself Out

Parents are under so much financial stress these days between downsizing, medical costs and the increasing price of sending a kid to college. It’s enough to make you give up if you think about it. So I don’t. Since I’ve become a parent, I’ve been kind of hiding my head in the sand when it comes to money. I save for retirement and always have money in my emergency fund, but that’s as far as my planning goes.

Before kids, I was kind of obsessed with mapping out where I would be financially in 10, 20, 30 and even 40 years down the road. When I pull out those old projection sheets now, I laugh because I was so naïve. But my broke status doesn’t bother me — I would rather have my kids than all the money in the world.

2. The Worry is Overwhelming

As a parent, there’s a never-ending parade of things to worry about. You’ll have a laundry list of health problems that will freak you out beyond belief. From fevers to rashes to headaches, you’ll become frantic over the strange things that seem to strike your child.

When my oldest child was one, he had a febrile seizure episode that landed him in the hospital for two days after going to our local doctors office. The doctor said that he had an ear infection that drove up his temperature, and that caused the seizures. As I sat sobbing in his room on and off during that hospital stay, and many nights after that, I wondered how we would handle the threat of these seizures coming back with subsequent illnesses – the doctor said he could have these frequently with illness or he might never have another one. Either way, he would outgrow them by the time he was around six years old.

I worried for the next two years every time he had a fever. You know how many times a small child gets fevers? A lot. That meant a lot of sleepless nights for me. I spent so much time working myself up into a panicked frenzy, and it was all for nothing. The seizures never happened again.

You think that would be a lesson for me, right? But it’s a battle I constantly fight. Every time my children are sick or report some sort of mysterious pain or ache to me, I’m secretly terrified. On the outside, I act like it’s no big deal, but on the inside, I’m already figuring out the keywords to type into a Google search.

And when things are good, I’m waiting for the other shoe to drop. These days, when I’m not worrying, I start worrying about that.

3. Single Parents Are Tougher Than Me

It’s a huge mystery to me how people can do this parenthood thing without a live-in reinforcement. Seriously, without my husband to help me, I’d be balled up in the corner, crying hysterically. How do single parents get everything done?

Not only is there the extra financial strain of being the only person bringing home a paycheck, but all the cleaning and chauffeuring would be too much to take by yourself. How do single parents have time for normal stuff like helping kids with homework and attending extracurricular activities? Do they ever sleep?

4. How to Prioritize and Not Take Myself So Seriously

As adults, we spend a lot of our time overworked and stressed out. Just when I think I can’t juggle one more single thing and I’m at my breaking point, my kids will do something to snap me out of my busy, serious mood. It’s often just what I need.

Kids are great at reminding us grown-ups that sometimes you need to have fun too. You can’t work all the time. If that means you have to tell people no once in a while or let the dishes sit in the sink overnight, that’s what you should do.

So every time I find myself too stressed or busy to carve out enough time for my kids, I put myself in their shoes. Then I make time. They are my priority, and I try to have my actions show that.

5. As an Adult, I’m Still Dealing with Mean Kids

I thought my days of dealing with mean kids were long over, but apparently, I was wrong. I hear about them every day from my kids, and I see their smug little faces every time I chaperone a school field trip or attend a ball game. It seems every generation has kids who just think they’re better than others, and take joy in making others feel bad about themselves.

Dealing with mean kids is even worse as an adult because this time it’s happening to your kids, and you’d do anything to spare them from the pain of having to deal with them.

I’ve learned that the best thing to do is let your kids know up-front that some kids just like to be mean, and sometimes it’s not their fault – they learned it from their own parents. Someday, they’ll probably learn their lesson, or maybe they’ll eventually be elected president – either way, you can’t control what they say or do, or what happens to them down the road. All you can do is focus on your own reaction to their behavior. But some days, it really isn’t easy to ignore the mean kids – even as an adult.

To Savor Every Moment

I think part of this attitude comes with age because time seems to pass so quickly when you’re an adult. But my desire to savor every moment really ramped up when my kids were born. I only get to see their firsts once – their first steps in preschool, first day of kindergarten, first dance. Those moments are precious, and I try to remind myself of that – especially during the hard days of parenting.

How Much Freedom Should You Give A Child?
Spanking Kids – A Better Way
Comment