More4kids
1 Comment
Between the ages of 15 and 30 months, a toddler begins to realize that he is a separate person from his parents; a person who has his own will and his own mind. This is when they learn to say 'no' for the first time. Here are 10 tips that can help... 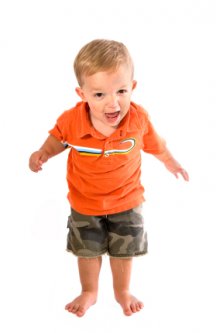 One of most frustrating stages of toddlerhood can be when a child learns to master the word “no.”

Between the ages of 15 and 30 months, a toddler begins to realize that he is a separate person from his parents; a person who has his own will and his own mind. As this realization sets in, a child begins to discover his independence and begins to practice asserting this independence to all who will listen. It’s this stage of development that is usually marked by a child singing a seemingly continuous chorus of a loud and proud “no.”

Although on the surface it may seem that the child is being defiant and difficult, a young child who is constantly saying “no” is in a monumental phase of early childhood development. When parents aren’t coached to recognize this stage for what it is, the result can be frequent power struggles between parent and child.

While it’s important for a child to understand that the parent is the person of authority, it’s also important to let a child engage in self discovery by allowing him to assert his feelings and to learn that it can be okay to say no. At this stage of development, when vocabulary is limited, a toddler often doesn’t have other expressions to show his displeasure, so inevitably “no” becomes his simple favorite.

Coaching parents through this natural and important stage of development can help them deal with the frustrations that can come when regardless of what they ask their child, the response that they get is an unmistakable “no.”

So how can parents navigate this important developmental stage? Here are 10 techniques for coaching kids through the contrary stage:

While it can be frustrating for parents who are dealing with a child in the “no” phase, when parents are educated and coached through this stage of development, frustrations can be limited and parents can help their children continue to develop healthy, whole and developmentally on track.

Biography: Caron Goode’s (EdD) insights are drawn from her fifteen years in private psychotherapy practice and thirty years of experience in the fields of education, personal empowerment, and health and wellness. She is the author of ten books (www.inspiredparenting.net) and the founder of the Academy for Coaching Parents,(www.acpi.biz) a training program for parents & professionals who wish to mentor other parents.