More4kids
Add Comment
Temper tantrums can put your parenting skills to the test. It is something most parents must learn how to deal with. What are some of the causes and what is a parent to do? Positive parenting is a must, as shaking, screaming at, or spanking a child shows a lack of control... 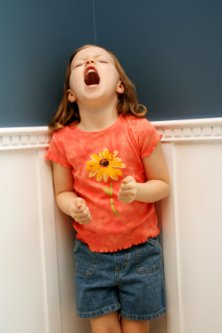 Temper tantrums can put your parenting skills to the test. The 3-year old that explodes with impatience or the 6-year old who screams in the toy store after hearing ‘no’ are all displays of a temper tantrum. The kicking, stomping, pounding, yelling, crying, slamming doors, throwing the body on the floor, and hurtful words that accompany a temper tantrum are typical of children between the ages of three and six with some seven- to nine-year olds still exhibiting the behavior. This emotional outburst can take place at any time and any place, whether the child is in a doctor’s office, grocery store, around family and friends, and even at church.

In order to gain a better hold of a situation that involves a temper tantrum, it is suggested to learn more about the subject and its causes. The emotions that swell within a child to create a temper tantrum involve higher brain functions that are unable to lower the levels of excited expression associated with the lower brain functions that control emotional and physical responses. As a result, an unreasonable fit that may include screaming, crying, and intense defiance will often surface. The child may become completely unwilling to listen to or comply with any efforts to pacify the situation.

Often, a child cannot stay still, sit down, or stand in one place. Sometimes, even when the reason for the temper tantrum is settled (as seen with the parent that finally gives in to buying the candy bar), the child may not even reach a level of calm or satisfaction. The emotional roller coaster that a child enters with a temper tantrum is sometimes attributed to an immature phase of forebrain development – highlighting the inability to deal with a building of emotions.

Some children are more prone to exhibiting a temper tantrum than others, as seen in individuals with neurological deficiencies, including autism or developmental barriers. A child that suffers damage to the forebrain may also undergo more temper tantrums, regardless if the injury is temporary or permanent.

Parents dread the temper tantrum their child may exhibit, but it is important to keep in mind that they are common occurrences and a rather expected behavior for young children. It may also help to keep in perspective that children are not the only ones to succumb to a temper tantrum and that even adults are known to display this undesirable behavior.

While the temper tantrum that occurs during childhood is often associated with not getting ones way, there are many other causes of a sudden explosion of emotions. The logic behind a temper tantrum is not always easily perceived. The kicking and screaming that may erupt could simply become a way for an over-stimulated child to rebel against too much activity. A child is sometimes hungry or overly tired when they display a temper tantrum and are unable to communicate these feelings.

A child undergoing sickness or suffering the first signs of illness may also showcase a temperamental fit. Sometimes, a child’s routine is disrupted and the confusion becomes too much to handle. A temper tantrum may also arise when independence is threatened, or they feel the pressure of a high level of restriction.

In the majority of circumstances involving a temper tantrum, the root of the act is often centered on frustration. There is also a misconception regarding temper tantrums, as they are not solely connected to unpleasant situations and can surface even when too much tension or stress mounts in regards to enjoyable or exciting circumstances.

Overall, a limited scope of understanding and a limited ability to vocalize needs and desires coupled with frustration is the perfect formula to create a tantrum. Your child is very capable of becoming angry and when they are unable to understand the realm of this emotion, they usually resort to tantrums as a form of expression. Additionally, the ability to cope with frustration at a young age is simply undeveloped.

How to Handle a Temper Tantrum

When the behavior of a young child grows out of control, it is necessary for the parent to step in and regain a hold of the situation. In order for the transition to occur smoothly, it is important for the parent to maintain a level head and not get angry with their child. Anger only adds fuel to the fire of a temper tantrum.

However, the worst thing a parent can do is give into the behaviors associated with a temper tantrum. As much as you want the screaming and possible public embarrassment to end, it is not good to reinforce the behavior you don’t want to deal with in the future. Remaining calm is a must when dealing with a tantrum. When possible, it is best to ignore the act. Many times, a tantrum lingers when there is an audience, therefore many parents have succeeded in picking up their child, placing he or she in their room and telling them they will remain there until they are in a better mood.

Positive parenting is a must, as shaking, screaming at, or spanking a child shows a lack of control. Trying to reason with your child in the midst of a tantrum is mostly ineffective. Sometimes, they are so wound tight with emotions that your child can’t even hear or focus on what you are saying. This will only cause you frustration. Once a tantrum has passed, a child requires comfort and support, as some tantrums are often traumatizing. Delivering reassurance shows you still care and forgive their outburst.