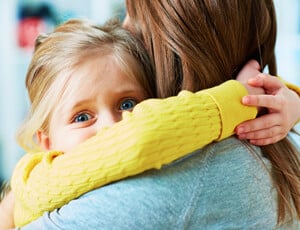 When I was in seventh grade, I spent two weeks terrified about a satanic ritual that was rumored to be scheduled for Halloween night in my hometown. Normally I couldn’t wait for Halloween, but that year was different. I dreaded its arrival, and with every passing day, my fears increased. I lost sleep worrying about it because I was so concerned for my safety on Halloween. I was also worried for my friends and family. And I was horrified for the poor victim who was going to be sacrificed that night.

Like most fears, this one never materialized. It was founded on rumors, and like most rumors, had spread like wildfire and had taken on a life of its own, becoming increasingly more horrific with each retelling.

When Halloween was over, I sighed with relief and tried to take away a lesson from the drama and worry. My lesson was to not let my imagination run wild, which was difficult for a budding writer.

It’s a lesson I try to teach my kids today.

Keeping up with current events is encouraged at their school and even required in some classes. And in fourth and sixth grades, their current grades, those headlines can be pretty terrifying.

They see violence from around the world, and sometimes, it hits uncomfortably close to home. They’ve heard about school shootings and have done drills to rehearse what they’ll do if there’s a shooter in their school. That’s heartbreaking as a parent.

Parents want their children to feel safe, loved and secure. But the world can be a terrible place at times, and knowing that can help you prepare for when things go wrong. While I want my kids to be able to handle difficult or dangerous situations, I don’t want them to carry year round my 12-year-old Halloween-level fears.

I’ve tried to come up with a strategy on how to handle these big discussions in my family, and I’ve found some methods that work for us. If you’re looking for a way to have these important talks with your kids, I hope these tips can help.

I just used this method a few months ago when crazed clown sightings were in the news around the country. My children’s school had a lockdown incident because there was a non-specific threat made on social media. By the time the reason for the lockdown had reached my son’s classroom, he was told by his friends that a clown with a machete was trying to get into the school. He was emotional that night at home and had trouble getting to sleep.

I reminded him how unreliable rumors were, and I told him there were no actual clown sightings in our town. I told him I know rumors like that are scary, but that he should think about it logically – a machete wouldn’t get a clown into a locked school building. He felt better after our talk, and I felt awful thinking about how worried he must have been in the classroom that afternoon.

Look at your child’s individual fear and come up with a solution to it. It might not be easy, but sometimes having a little sense of control over a situation can make you feel less scared.

One word of caution though, don’t let that new lesson or skill go to your child’s head. The worst thing you can let them do is have an inflated sense of their ability. A few karate lessons won’t make them able to fight off three bullies at once or someone holding a weapon. Remind your child their number one responsibility is still to avoid fights and get straight to safety during a dangerous encounter.

Let them know that most of the world is basically good. Compare it to their class in school. They likely get along with most people in their class, and there might be one or two kids who spoil the experience for everyone else. Tell them that’s true about the world as well. The ones who act out tend to get more attention, even though there are more kind people out there than cruel.

If you have any tips you’ve used to calm your children down after they’ve read traumatic headlines, experienced anxiety or even witnessed a tragedy firsthand, I’d love to hear them. I’m always looking for ways to add to my kids’ coping mechanisms. And these days I could use a few more for myself as well. Having to help your children deal with such adult situations isn’t easy. The more parents talk to each other and their children about it, the better off we’ll all be.