More4kids
Add Comment
Parenting and Dads. Claire Thurston presents some of her 20 year reseach on the societal implications of fatherâ€™s role in child development.
by Claire Thurston
Even though more and more fathers are prioritizing time with their families, many may not know how they specifically impact their children in different ways from mothers.[1] This article spotlights fathers’ contributions because those long term research results have not yet reached a mainstream audience. By highlighting father’s importance to his child, The Dad Difference does not seek to disparage mothers, especially single mothers, or to condone male or paternal violence. There will be those who fear that scientific data demonstrating father’s impact would resurrect patriarchy and erase the hard-won gains of women in the twentieth century, but this is not a zero-sum game. When fathers know more concretely what they contribute to their children: men, women, families and society will benefit.
Popular culture acknowledges that father contributes to sex role identification, but what is not known is that father contributes to his child’s development on so many levels prior to sex role issues. Clearly, father and child never shared the merged pregnant environment; they have always stood apart. But instead of the stereotype of dads being distant based on this reality, research shows that their separateness brings enormous benefits. Yale University fatherhood expert Dr. Kyle Pruett cites research showing how fathers specialize in state disruptive play, which arouses the baby’s interest by moving limbs in new ways or by creating challenging environments.[2] Is there evidence that an infant perceives mother and father differently? By eight weeks, infants show dissimilar responses to maternal and paternal interactions. In a videotaped comparison of relaxed infants, as mother approaches the baby’s heart and respiratory rates slow while their eyes partially close; as father approaches, the baby’s heart and respiratory rates speed up while their eyes widen and they hunch up their shoulders.[3] It would seem that the infants relax as they expect mother’s comfort and get excited in anticipation of father’s stimulating play. In a long term study of fathers, mothers and their three-month-old infants, researchers found that the qualities of father’s positive interaction predicted the baby’s attachment security to father at one year, but that the paternal qualities did not depend on or match qualities of infant-mother attachment.[4] Stressed infants look to mothers for comforting when fathers are also available, suggesting that the quality of the infant-mother and infant-father relationships is not the same.[5] Other studies show that even with co-parenting between fathers and mothers, when stressed, tired, sick, or in need of soothing, babies still will reach for mother more often.[6] 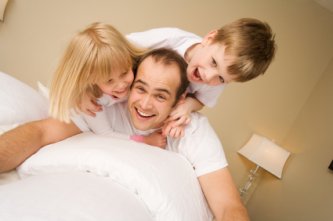 As the baby gets older, father remains the playmate of choice for both boys and girls, with his more physically active and challenging style. When two-and-one-half year old children want to play, more that two thirds of the time, they will choose their father over their mother.[7] Peter Blos, a psychologist, primarily known for his work with adolescents, looks to infancy studies to unlock clues to the father-son relationship and its consequences in the teenage years. He observes that the different ways that mother and father hold or play with their infant contributes to enriching and expanding the child’s budding individuation, the process where the child feels safe to become his own person.[8]
Since father is outside and beyond the child’s self, he reinforces the child’s sense of autonomous power and identity. Autonomy is not matching oneself to existing reality, “I am like this person in that way.” Autonomy is more primal; it is the positive assertion, “I am. I am here. I am a player on the world stage; I have that basic human dignity.” Infants who have involved fathers during the first one to two years are more likely to eagerly investigate the world around them. Father’s stimulating play coupled with a slower response to help the child through frustrating situations promotes independence and the patience to solve problems.[9]  In other words, when a child is unhappy while struggling to work out a solution to a problem, fathers wait longer than mothers before they intervene or comfort the child. A recent study of 80 five-year-olds, who have lived with both biological parents since birth, shows that children with a secure attachment to their father (in terms of behavior measured by teachers’ ratings) demonstrate more self-confidence, initiative and independence.[10]  On any given playground, who is urging, “Try to pump a little harder, you can reach that bar!”? Who is saying, “Careful, you might fall, watch out for…?” Mothers tend toward caution, while fathers often challenge kids to the limit. One can see how the child would benefit from the combination; together parents help keep children safe while expanding experiences and confidence.[11] 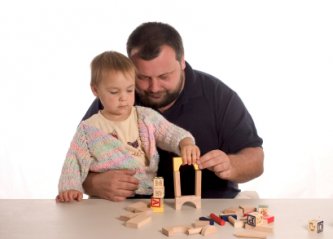 How does the empathic process work between father and child? They begin by paying attention to each other. For instance, father sets up a big pile of blocks, and the infant crawls over in a hurry to knock them over. The game is fun and includes learning and development, but in terms of the father-child relationship, the game is just a means for the baby and father to engage each other. When father restacks the blocks, he can see that his action spurs his child to get excited to knock them down again. And the baby gets more charged up at seeing his ability to affect his father. Researchers: Richard Koestner, Carol Franz & Joel Weinberger examine the different parental contributions at age 5 to the development of empathy in the adult as measured at age 31. Father’s involvement in childcare-spending time alone with his children performing routine childcare at least twice per week is the most important factor in developing empathy, the ability to feel as others do, while the second most important factor is mother tolerating the child’s dependent behavior.[12] Father does not have to be a paragon of virtue to contribute to the development of empathy in his child; he merely has to be available.
As the first other, father is strategically situated to represent transcendence and aspiration to his child. He is the infant’s first initiation experience, first threshold to that which is beyond grasp. Aside from its spiritual connotations, transcendence encompasses the promise of becoming someone in a world of possibility and significance. This is a world of hope, where overcoming obstacles is invigorating, where struggle is the watchword of progress in character development.
In 1987, I began an investigation of the father-value connection. Approximately 100 fathers of preschool children across the racial, cultural and economic spectrum of San Francisco answered questions about their values and parenting styles. I asked each father to rate the role of institutional religion in his upbringing as well as in his child’s life. Finally, I asked each man to rate the quality of his relationship to his father as well his father’s values and parenting style. It is impossible to assess whether any value makes a better father, but I could look at which values and parenting styles linked with father/child intimacy as determined by a scale of twenty questions such as “my child comes to me when he/she has a problem” or “I read to my child.”  The father – value connection manifests in several ways. As expected, the findings show that father plays a very strong role in passing along religious tradition. The more active institutional religion is in father’s family of origin, the more active institutional religion is in the life of the child. But there are also strong results of father-child closeness correlated to values among those fathers who claim no interest in Religion with a capital “R.”[13]
Ramifications from fatherhood research will eventually affect every aspect of society, spiraling outward in concentric circles from the father-child relationship itself, to marriage, family, the workplace, social ills, culture and the law to the evolution of civilization. With a comprehensive theoretical basis which includes father’s impact, untold discoveries become possible while a wide range of social problems may have improved treatment and prevention strategies.
To find out more about father’s unique impacts on his children go to: www.daddifference.com 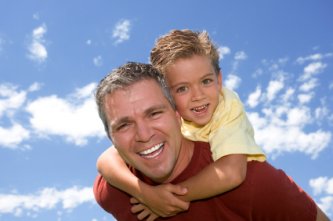 [1] Zakrewski, 2005. today, a large number of younger fathers want to be more involved in family life. In 1992, about 68% of college educated men focused on wanting jobs with more responsibility whereas in 2002, that percentage dropped 16 points. And the Radcliffe Public Policy Center study of 2000 reports that fathers aged 21-39 ranked a work schedule that enabled them to spend more time with their families as very important and 70% of them said that they would be willing to sacrifice pay and promotion if necessary.
[2] O’Connell, p.71.
[3] Yogman as cited in Pruett, p.5.
[4] Cox, M.J. et al, 1992. The composite paternal positive interaction in play includes: sensitivity, positive   affect, animation, attitude toward play, activity, encouragement of achievement, amount of vocalizing to the child and amount of reciprocal play.
[5] Lamb, 1976a and b.
[6] Newton, p.14.
[7] Clarke-Stewart, p.466-478.
[8] Blos, p. 25
[9] Pruett, 2000, p.41-2
[10] Verschueren & Marcoen, p.183-201.
[11] US-ACF, 2004.
[12] Koestner, Franz &Weinberger, p. 709-717.
[13] Thurston, 1987.
WORKS CITED
Blos, Peter. Son and Father Before and Beyond the Oedipus Complex. New York: The
Free Press, 1984.
Clarke-Stewart, K.A. “And Daddy makes three: The Father’s impact on mother and
young child.” Child Development. 49 (1978): 466-478.
Cox, M.J.; Owen, M.T.: Henderson, V.K. and Margand, N.A. “Prediction of infant-father
and infant-mother attachment.” Developmental Psychology. 28 (1992): 474-483.
Koestner, R., Franz, C., & Weinberger, J. “The family origins of empathic concern: A 26-
year longitudinal study.” Journal of Personality and Social Psychology. 58 (1990): 709-717.
Lamb, M.E. “Effects of stress and cohort on mother-and father-infant interaction.”
Developmental Psychology. 12 (1976a): 435-443.
Lamb, M.E. “Twelve-month-olds and their parents: Interaction in a laboratory
playroom.” Developmental Psychology. 12 (1976b): 237-244.
Mahler, M.S., Pine, F. & Bergman, A. The Psychological Birth of the Human Infant.
New York: Basic books, 1975.
O’Connell, Mark. The Good Father: On Men, Masculinity, and Life in the
Family. New York: Simon and Schuster, 2005.
Pruett, Kyle D. Fatherneed. New York: Broadway Books, 2000.
Pruett, Kyle D. “How men and children affect each other’s development.” Zero to Three.
August/September 1997. Vol.18:1.
Thurston, C. Fathers and values transmission: A pilot study. Unpublished
ms, The Institute of Psychological Research and Analysis at Berkeley, CA., 1987
United States. Administration for Children & Families. Building blocks for father
involvement: Building block 1: Appreciating how fathers give children a head start. June 2004. 19 Aug. 2005
http://www.headstartinfo.org/publications/ building_blocks 1.htm.
Verschueren, K. & Marcoen, A. “Representation of self and socioemotional competence
kindergartners: Differential and combined effects of attachment to mother and father.” Child Development. 70 (1999): 183-201.
Zakrzewski, Paul. “Daddy, what did you do in the men’s movement?” Boston.com. 6
Jun. 2005. The Boston Globe. 11 Mar. 2008
<http://www.boston.com/news/globe/ideas/articles/2005/06/19/daddy_what_did_you_do_in…. >
Biography
Claire Thurston
Personal Statement
In 2004, I joined the ranks of the Presidential Management Fellows, about 400 people selected from across the country to fast-track into management positions in the Federal government. From this rigorous two-year training and subsequently, I learned that making sound policy decisions required drilling broadly-getting different opinions, especially contradictory ones and drilling deeply into the history and unspoken assumptions underlying the theories that led to decisions. After adding this perspective to years of research and study on trying to understand fatherhood in America, I have come to believe that fathers remain an untapped transformational force; they have been standing in the shadows. With findings from new research which includes father’s impact, family relationships will strengthen while a wide range of social problems may have improved treatment and prevention strategies.
Claire Thurston has been researching the societal implications of father’s role in child development for over 20 years. Highlights include:
2006
Proposal development on applying father research to preventing child abuse
University of Colorado-Denver: Center on Domestic Violence
2004
Awarded the Presidential Management Fellowship
1998-2003
The Director of the Fatherhood Foundation, a nonprofit whose mission is to promote positive fatherhood
2000
Under the auspices of the Fatherhood Foundation, a pilot of the Paternal Empathy Program was carried out with a group of statutory rape perpetrators as mandated by several Denver area probation departments with promising results
1993
Board member then staff member of Family Network, an agency for rebuilding intergenerational family support systems, San Francisco, California.
1991