More4kids
Add Comment
Page 1 of 2
From better grades and behaviors to higher graduation rates and better social skills, research clearly indicates that children who have involved parents do better in every aspect of their lives. Even though active involvement in children’s lives takes a great deal of time, energy and effort it seems it is well worth it when you look at the investment we are making in our children and their future. 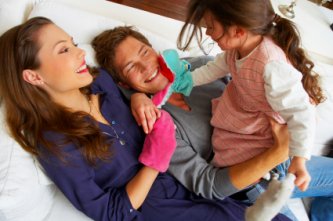 In a recent discussion with a group of parents about parent involvement, one of the group members said, “Define parent involvement.” As different parents gave their definition, it was clear that parental involvement means different things to different people.
“Being a homeroom mother.” “Helping children with their homework.” “Being home when they arrive home from school.” “Helping coach their sports team.”
Thinking back to your own childhood, what were the most meaningful ways your parents connected with you?
What does it mean to be an involved parent?
In a recent survey of more than 1,000 Hamilton County residents, conducted by Barna Research group, for First Things First, respondents were asked to define what they believe it means to be an involved parent and what it looks like. Those surveyed defined parent involvement as:
Interestingly, researchers noted that despite repeated probing by interviewers, most parents were only able to identify one, maybe two areas that define what it means to be an involved parent. This suggests that people, in general, have a fairly superficial conception of being involved as a parent.
This revelation should raise some eyebrows because research shows when parents know how to engage their children and do so, the differences are dramatic compared to children with [tag-ice]uninvolved parents[/tag-ice].
According to the [tag-tec]Parent Teacher Association[/tag-tec], parent involvement is the participation of parents in every facet of children’s education and development from birth to adulthood, recognizing that parents are the primary influence in children’s lives.
According to George Doub, creator of Survival Skills for Healthy Families, children learn by copying what they see other people do.   They are most influenced by the people who spend the most time with them. Parents are effective role models for their children when they plan time with their children, encourage them and spend time talking and listening to them about things that have meaning for both parent and child.

Many parents believe that as children approach the teen years, their influence drops significantly. While it is true that parental influence does diminish, parents who continue to stay engaged in the lives of their children are still seen as an important resource and influence in the life of the child.

What do the Kids Think?
In an informal survey of local young people, they were asked how their parents were involved in their lives. Answers ranged from helping with homework and eating meals together to helping me with sports and spending time together doing something fun. When they were asked what they liked most about spending time with their parents the overwhelming popular answer was, when we just hang out together.
Read More

Parenting: What kind of parent are you – an encourager or an intimidator?
Parenting a Tweener: A Survival Guide
Comment