More4kids
2 Comments
Every once in a while, we see an article in the news about a woman giving birth at age 65 or 66. We don’t hear as much about older fathers, although 80-year-old Hugh Hefner made news earlier this year when he announced that he and his girlfriend were considering having a baby. What special challenges and rewards await these mid-life parents? 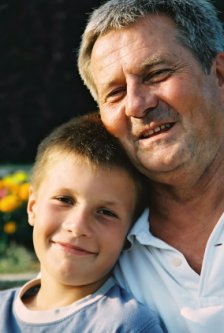 Every once in a while, we see an article in the news about a woman giving birth at age 65 or 66. We don’t hear as much about older fathers, although 80-year-old Hugh Hefner made news earlier this year when he announced that he and his girlfriend were considering having a baby. While new parents over age 60 are rare, the fact is that more and more people in their forties and fifties are having children. 20% of women now wait until age 35 to have their first babies and a 2005 study showed that the birth rate for women in their early to mid-40s had grown 5% in the last decade. What special challenges and rewards await these mid-life parents?

For older parents, the worries can begin even before pregnancy. Women over 40 years of age are at greater risk of complications during pregnancy. Rates of pre-eclampsia, gestational diabetes, and miscarriage all rise, as do the rates of Down syndrome in the child. Paternal age can make a difference too: studies have shown a link between advanced paternal age and Down syndrome and schizophrenia in their children. Because of these greater risks, women who are pregnant after 40 need to be even more vigilant about seeking prenatal care and taking care of themselves during pregnancy. In fact, they should visit their doctor before they become pregnant, in order to get as healthy as possible before the pregnancy begins.

On a more positive note, the American College of Obstetricians and [tag-tec]Gynecologists[/tag-tec] have concluded that the current interest in health and fitness is greatly benefiting older women, who “may find themselves in better shape than they were at a younger age.” This greater health and fitness is also useful for parents after their children are born. One great challenge of parenting is simply the physical demands of keeping up with an active child. Because a decline in energy is a natural part of aging, this can be a special concern for older parents. Fortunately, having children can keep you feeling young. As author Pamela Shires Sneddon, who had three children after age 40, explains, “The reality is, as an older parent, regardless of how I might feel, I’m kept from focusing on age-related aches and pains by the demands of those who assume I have limitless energy.” It also helps to follow the guidelines for healthy living we all know – eat right, get enough sleep, [tag-ice]exercise[/tag-ice], and don’t smoke. In addition, older parents should see their doctors regularly for physicals and preventive care. By taking special care of themselves, they can increase the odds they will be around for years to come.

[tag-cat]Parenting[/tag-cat] after 40 can also come with emotional and financial challenges. Older parents do not enjoy being mistaken for their child’s grandparent or worrying about teething when all their friends are worrying about broken curfews. They also don’t enjoy putting money into a college fund when their retirement fund lies empty. However, as many challenges as there are for older parents, there are just as many rewards—for parents and children alike. Older parents tend to spend more time with their children and to be more patient. Their life experiences have given them a wiser perspective, so they don’t worry as much about spilled juice or scraped knees. Instead, they are able to revel in the joys of parenting. As Susan Segal, who had her first child at age 41, writes, “We would like to be younger – who wouldn’t. But then we wouldn’t have the kids we have, or the experiences we’re having now. With all the aches and pains and exhaustion and embarrassment and headaches, we’d do it all again in a heartbeat.”

Parenting And Raising Happy Kids Without Giving Them The World
Parenting 101: Tips to Encourage Your Childs Emotional Growth
Comment