Kevin
Add Comment
What is your parenting style? Are you an encourager or an intimidator, or somewhere in between? This article explains the difference and how to be an effective parent through praise of behavior and positive reinforcement. 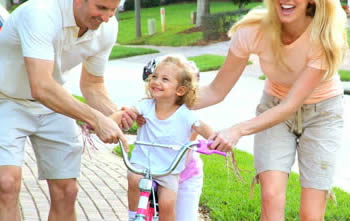 What kind of parent are you – an encourager or an intimidator? The encourager stresses working towards a certain goal. The intimidator stresses winning. For this kind of parent, “It’s the results that count… not the effort, not the intentions.”  What type of parenting style do you lean towards? Or are you a bit of both?

Naturally, the one encouraged first is happy about the praises heaped on him or her. But when you give him or her the opposite, the reactions would be: disbelief, anger…and later, self-doubt. Somehow, all those discouraging comments get to you.

That exercise made us step back and examine the atmosphere you create at home. Is it encouraging or downgrading? Are you an encourager or an intimidator? Note that your targets are parent-volunteers, so they were aware that this was some sort of exercise, yet it affected their self-esteem. Imagine how a string of negative messages or put-downs can affect an insecure child?

Encouragement is not the same as pampering though. Pampering means regularly doing something the teenagers can do for themselves such as fixing their room, preparing lunch, or even waking up. Overindulgence makes a child irresponsible. Overprotection makes kids dependent on others.

Of course, you should give praise when it is due. But encouragement does not thrive on praises alone. A child can tell empty praises from real ones. Besides, there is danger that a child hungry for praise will merely conform to please and won’t feel okay unless praised. Encouragement means emphasis on strengths and assets, other than faults. It is non-judgmental – accepting the level of accomplishment of each child.

Unrealistic expectations could be stressful to a child. If circumstances or physical inability prevents him or her from fulfilling certain expectations, then you can’t say, “You can do it.” The kid would be bound for certain disappointment. It’s just like saying “It won’t hurt” when an injection really hurts. You can’t fool children.

Sometimes, you have to help your children set realistic goals. When one of the kids wants to enter a contest, you’re all out rooting for him or her – whether it’s an art contest, a science contest, or whatever. Some kids start counting their prizes even before they submit their entries. In those cases, you explain the odds and make the project so much fun that it is the effort that counts.

Other discouraging family practices you learned at seminars are: permissiveness (which makes a child unconcerned about others’ rights), inconsistent discipline (results in feeling that life is unfair) and denial of feelings. A person who is not in touch with his or her own feelings can never relate to others.

“Poor you,” mothers often say to a child after bumping his or her head. Sometimes, parents even go to such lengths as spanking the object that caused pain to appease the crying child. It’s not funny. It’s stupid. Pity breeds a discouraging family atmosphere. It does not help build confidence in the child.

When your kids come to you for help, be glad. Don’t shoo them away by lecturing:

Most of these are recordings in your minds, handed down to you by your parents and their parents. It’s about time you got out of that mode and reprogram yourself by consciously creating an encouraging environment at home.

It is not the one-sided “Honor thy father and mother.” Each family should work out their own “Treaty of Friendship, Cooperation and Security”, with children given the opportunities to give opinions, participate in decisions, and take on responsibilities according to their capabilities.

“Don’t expect to change your teenager.” The beginning of change is to accept one’s mistakes. Saying sorry to your children can do wonders in bridging the generation gap. It is only human to let the children know, “Hey, kids! Parents need some encouragement too!”

Effective Praise: Instill Good Behavior Through Positive Reinforcement, Not Through Bribery or Punishment

How do you discipline your child? Most of the parents would admit to having spanked their children at least once. In behavioral studies, 3 approaches to eliciting a desired behavior can also be found in parents’ discipline styles: positive reinforcement, negative reinforcement, and punishment.

Some parents mistakenly associate positive reinforcement with bribing or giving material rewards. In bribery, you promise something bigger and more valuable than the behavior you are expecting. You also tend to negotiate or beg, even increasing the value of the prize, just to make sure that the behavior you wish is manifested. Giving a child verbal encouragement or small tokens after they exhibit a certain desirable behavior does not qualify for bribery.

Other parents steer clear from positive reinforcers for fear that they might spoil their child. However, it is far from spoiling if the reward given is commensurate to the positive behavior exhibited by the child. Material rewards need not be expensive things; small tokens like stickers or erasers are hardly decadent. Non-material reinforcers are highly recommended: a hug, a wink, and a compliment for a job well done.

There is no specific age at which to start using positive reinforcement; children learn to relate reinforcers to their behavior after several similar experiences and patterns. Good deeds that were reinforced at an early age become part of the child’s personality.

As children grow, their needs will differ in the same way that our expectations of them will expand. So, the reinforcers may change, but the general principle remains. The success of positive reinforcement greatly depends not on the child, but on the adult using it as a disciplinary approach.

When used successfully, positive reinforcement can develop a child’s intrinsic motivation. It can provide children some understanding of expectations and behavior.

International studies have shown that praise definitely increases people’s inner interest in activities. Anything too much or too little is proven ineffective. Too much praise is ineffective because it comes too easy and often reduces the value of praise. Too little of it and lack of consistency do not give it much significance, as well. Here are some keywords to remember when giving praise:

When Does Spoiling A Child Start?

Spoiling a child takes time. It consists of a series of early life decisions and events which parents or guardians make for young children. The course of these early life decisions can eventually develop a child’s preferences: his or her way of reacting toward individuals around him or her, study habits, eating habits, and social skills. Even before the child is ready, today’s children have too many options.

Moreover, due to work demands of harried parents, the resulting guilt about time for and with the child can be a potent recipe for spoiling. Today’s parent can opt to give in to tantrums and giving too many material things to keep the peace and assuage guilt. Likewise, there may be inconsistencies in the manner of dealing with the child among the adults. The result is a spoiled child.

Take for example these two extreme cases. The first is 10-year-old Chase who was unwilling to go to school and do any schoolwork if he were not to receive any compensation, like toys or electronic games. This young boy would force his will on his parents by banging his head on the wall repeatedly until his demands are met.

Giving in to such demands is not the answer, as they most likely lead to only bigger, unrealistic, and self-centered demands. Another case is 4-year-old Paul who was unable to appreciate his possessions, as he would be given new toys on almost a daily basis. When Paul’s toy is broken, he would quickly ask, “Can we buy another one?”

Discipline is often associated with punishment. Actually, punishments and rewards are just aspects of it. Discipline, if applied consistently and with consideration of the child’s level of understanding, is the best way of instilling a sense of responsibility in children like Chase and Paul. This starts with the parent being clear about what the child can and cannot do. Slowly, if the parents are clear and consistent, the child internalizes a moral compass to help guide him or her in decision-making.

In the case of Chase, there was inconsistency in the way the parents dealt with him. It was his mother who would set boundaries, like limiting the toys being bought and the amount of time he is allowed to play with his gaming unit. Chase’s father, in an effort to spend quality time with his son, would inadvertently sabotage these rules by buying toys and allowing his son to play when they would spend time together.

Discipline is an ongoing process and cannot be done overnight. It requires constant compromise among parents and guardians attempting to instill it on their children. Other factors to take into consideration are family dynamics and personal values. These issues were very prominent in the case of Paul. Paul is the younger of two boys, both coming from different marriages. Paul’s mother has difficulty spending time with her children, as she spends most of her time away from home. She also has a tendency to give in to Paul’s demands in order for him to quiet down and refrain from throwing tantrums.

It is never too late to instill discipline. Sit down with your significant other today and list down the areas that need to be addressed in the life of your child, as the effort you make today will shape the man or woman your child will be in the future.